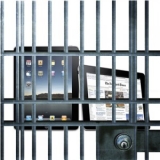 Two friends, Dian and Randy, were in for a surprise when on Nov. 24 at City Walk mall in Central Jakarta they tried to sell two iPads which they previously purchased in Singapore. According to Dian and Randy they regretted their purchase after returning to Indonesia and posted the two iPads on an Indonesian online classified site. After they were contacted they met with the potential buyers who then appeared to be undercover police agents.

According to the Jakarta Post “A House legislator urged the National Police on Saturday to explain how two friends were arrested for selling two iPads they regretted buying on vacation in Singapore.” It seems to be pretty bad PR for the police to arrest two ordinary guys that maybe want to monetize a little on their trip to Singapore.

Personally I think that it’s hard to explain the thoughts behind a law like this unless there’s clear evidence of smuggling, which obviously wasn’t the case in this incident. Now I’m a guest in this country so I try to be careful what I say about laws and politics. However, Indonesia is a democracy which means everyone is equal in the eye of the law. Well that surely means that as from tomorrow all gadget shop owners will be arrested and their shops will be closed. I’m a gadget freak and buy my stuff in authorized selling points but most of the time the gadget doesn’t have an Indonesian manual. But so far I didn’t hear of any gadget shop being shutdown or their owner being arrested because of selling gadgets without a manual.

Now on the upside, it’s nice to see that the police is looking into Internet sales but it would be really really nice if they would focus in the real frauds that offer products but never will deliver. In my opinion that’s a real crime and should be attacked heads on and I know that many of the online classifieds site are more than happy to support the police in this anyway they can.

So from Sangat Pedas we kindly ask the Jakarta police to cut Dian and Randy some slack and let them go free. 8 months in prison for breaking a law that is normally never carried out seems like a great injustice. If not than be consistent and arrest every shop owner selling gadgets without an Indonesian manual and then try explaining that to the public.