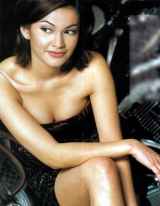 We’ve put all our hopes for the Indonesian startup scene in young talented geeks, fluent in php, Zend and Klingon. But hell, of all people it’s the celebs that are rockin’ the startup scene. As if they don’t have enough going for themselves. And not the just any kind of celebs. No siree! Indonesia now has her own Justin Timberlake in the persona of no one less than the talented and lovely Cut Tari. Famous in Indonesia for being a soap star, world famous for a case of “mistaken identity” in a pron video.

But let bygone be bygone, whatever happened in the past is nothing more than water under the bridge. Cut Tari is one of us now, a geek, an entrepreneur, a founder. I’m pretty sure I represent the whole male part of the Indonesian tech-startup community when I say: WELCOME TO THE CLUB DEAR! You’re a Pirate now!

So before I continue about Cut Tari (iLove you too beb! - mirror), first some brief info about iPosting.com. Let’s first analyze the name: “i” is obviously for the Internet that’s gonna be huge, the next big thing. Or it might be “I” as the word addressing first sentence which is especially popular amongst celebrities. And ask yourself, what do Indonesians do the most on the Internet? Posting! Hence: I(nternet) + posting = iPosting. SHEER GENIUS! BOX!

So what is iPosting? Well, it’s a social media network like Facebook and Google+ but then less as in iLess. Less iFunctionality, less iUsers, less iPosts and less iSpeed. Cos it’s slow, like so slow that times to load certain pages takes more than a minute at times. Either their hosting provider is really crappy or they need to do some serious database tuning and implement some caching. But let’s not get too negative here, it’s just been recently launched so let’s give them a break for now.

At least iPosting already has some users, posts, walls and notifications so it is a genuine certified social media platform. And, they’ve got a master plan: iPosting has got CELEBRITIES! Basically their USP is that iPosting allows you to connect with your favorite celebrities. Myself excluded I’ve counted 12 celebs such as Natasha Rizki, Gista Putri, Carissa Puteri “Rexona”, and of course our beloved Cut Tari herself.

So who’s behind iPosting.com? Well, the domain name is privacy protected. But this post on iPosting basically tells it, the founders are Richard Kevin and Cut Tari. The site is build by Lumonata who are based in Bali and big respect for that because Bali is famous for a lot of things but certainly not for it’s fast and reliable Internet connections.

So there you have it, an Indonesian social media startup with celebrities. Only downside is that these celebrities are also posting (even more) on Twitter and Facebook. So the question is why should people use iPosting.com? So far I can’t come up with any reason without seriously hurting my rep. Sorry, but I just tell it like I think it is, nothing personal.

But Cut, dear, no worries, Sangat Pedas has got your “6″. Hell, the whole Jakarta tech-scene has never been so excited. We’ve already popped some bubbles while discussing how great it will be with you in our midst. How just your presence will transform Jakarta into the next Silicon Valley. Every geek, blogger, entrepreneur and expert is dying to share their know-how and experience with you, free of charge, no strings attached. You know, just one geek willing to help another. Just because we’re friends. That’s how geeks roll in Jakarta! Ping me when you need me beb!