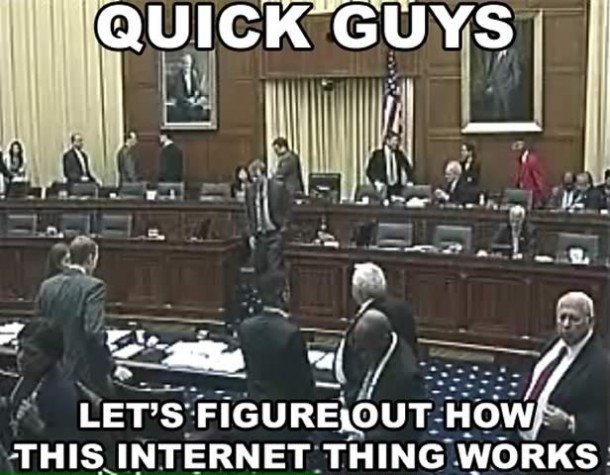 For those who live under a rock, PIPA and SOPA, proposed bills to fight online piracy, would basically have made it possible for the entertainment industries to shut down any website it doesn’t like without prior interference from the legal system. This plan goes so far that even sites linking to content that supposedly infringes the copyright of the entertainment sharks could be shut down in an instance. Basically these bills could potentially mean the end for platforms like Facebook, Twitter, Digg and just about any user-content based platform.

For me this is not only a win for freedom of speech, but also for the people versus money. This bill was initiated by Congress man Lamar Smith, who got elected thanks to sponsoring by the entertainment industry and is basically their puppet on a string arguing if you’re opposed this bill you’re not a patriot. These bills were such a clear example of companies buying their way into government and legislation where Lamar Smith is the example of everything rotten in politics. Don’t get me wrong, I’m not in favor of copyright infringement in any way. However, it can not be that the interests of a few rich prevale above constitutional rights of all. Senator Tom Coburn nailed it by saying “You’ve got to stop online piracy, but you’ve got to do it in a way that doesn’t affect First Amendment rights”.

Tons of kudos to guys like Jimmy Wales from Wikipedia, the Reddit.com guys and many other sites to bring this bill to the public’s attention avoiding the quick and silent pass Lamar Smith was aiming and hoping for.