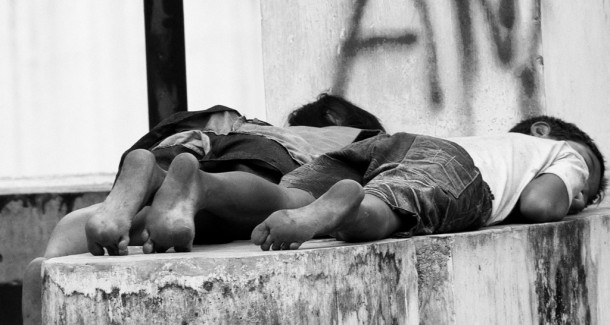 Some things are hard to get used to when living in Jakarta. On one hand there’s the glitter and glamour of the malls, the porche restaurants and rich people competing for who has the most over-the-top car. In shrining contrast with that there’s so much poverty and suffering which is so apparent when you just pay a little bit of attention. One of the most shrining street sites are the Jakarta street children begging for money at crossings and traffic lights.

I’m a realist and always to tell my wife “honey, you can’t save the whole world”, she’s actually always trying to do that. But some things you just can’t ignore and for me that’s the children and even babies “working” in the streets of Jakarta. Babies are often used by women beggars to create more empathie and children are working late in the streets in the hazardous environment of the Jakarta streets.

Every time I see these children or women with babies it hurts a bit, I guess most human beings have an instinct for protecting kids. Being a father myself I can not imagine my daughter in such a hopeless situation without the prospect of any future. Normally I shake it off and accept it as part of living in Jakarta.

Yesterday though was different, again we had to stop in front of a traffic light where a lot of children were working. Having my window open I heard one girl, probably 6-7 years old, crying out for her mom while being held by a guy who didn’t strike me as a close relative. Instinctively I wanted to get out of the car and “deal” with the situation but my mind prevented me from that. Interfering in local situations as an expat is just not a smart thing to do and what could I possibly do?

But this time I just don’t want to shake it off and except it as part of life. Twitter friend Aimber was kind enough to point out that there are organizations who actually help, such as Sahabat Anak (Children’s best friend). So today I spend my time thinking and discussing what I can do as a person and as a successful Internet entrepreneur to make a difference for these kids. I hope you will do the same. Any help, big or small makes a difference.

One thing you have to know is that these children are not just collecting money for themselves, they are part of a maffia kind of structure in which most of the money they collect ends up in the pockets of unscrupulous criminals who gain their wealth abusing the misfortune of these kids. So actually the most wise thing to do is NOT GIVE ANY MONEY.

By giving money you only keep the business model of the criminals behind it alive and more kids will be dragged into this live.

Don’t give these kids money, instead give them a future!