Since my work is more and more taking place outside the office and in my car I’ve decided it was time to purchase my long desired Samsung Galaxy Tab. I’ve written sarcastic posts about the Galaxy Tab P1000 but that was obviously just envy. And I don’t know if it’s because of its price or Samsung’s subliminal marketing or the great slogans (it does many things?? what the hell does that mean?) but in the end I picked the Galaxy tab 10.1 over the iPad2. Definitely also because it supports flash though not natively and the design and interface have become more similar to the iPad especially with the TouchWiz UX.

This won’t be a review like you can find on 18.300.000 other sites but more a post about the things I noticed, solved and tested with a focus on rooting and over-clocking the device.

So last week I finally got it and yes including an Indonesian manual cos I don’t want  to be involved in any criminal activities. Anyway, I unboxed it and charged it which takes pretty long but then again in my opinion it has a great battery time so I’m not complaining. The first thing I focussed on was installing flash so I could fully enjoy Google Analytics on my Galaxy Tab 10.1. So I installed Adobe Flash Player 10.3 for Android and…. it didn’t work, well at least not in the standard installed browser. So I solved it by installing Dolphin for Pad V1.0 Beta which is pretty ok but definitely also check out Maxthon Mobile for 10″ Tablets.

Anyway, flash worked in my newly installed browser so next I thought it would be nice to install Kindle. After all I’m a long time Kindle user on my laptop and using it on my Samsung Galaxy Tab 10.1 would be a major step forward. So first I searched in the Android Market App but no result, weird but let’s just install it straight from Amazon.

Well, that’s awfully nice and friendly of you Amazon but what about all the books I already purchased before I moved to Indonesia? I get it that copyright issues are the reason for this but since when do those issues apply on books purchased legally and then bringing them to another country where you start a new life?

This was pretty much a major set back because Kindle was in fact 15% of my motivation to by a tablet and I sure as hell didn’t get 15% discount. So I called a friend of mine and asked him what I could do about it. “Well, you have to root you Galaxy Tab 10.1″ was basically all he said. OMG, rooting, that means terminal sessions, Linux commands, flashing and ending up asking the guys in Ambassador Mall to fix my Galaxy Tab again. But I had some time on my hand so I was determined to do this: “Death or Glory”.

Rooting basically is a synonym for jailbreaking your phone, in this case meaning getting unrestricted access to you file system and taking away some other by carriers imposed restrictions like tethering. It also means that you will be capable of installing illegally downloaded apps which you normally would have to pay for. Now let me get this clear, the nice thing about Android apps is that you get great apps for a really low price and often even for free. So not only from a legal point of view but also just as a tech lover: “SAY NO TO ILLEGAL SOFTWARE!” Developers work for weeks if not months on an app which they charge a just few bucks for, so don’t be an ass and just pay. All the apps I used in the process of rooting and over-clocking were paid for in full even when there was a free version available.

Last but not least, rooting and over-clocking your device you do completely at your own risk. I’m only sharing what worked for me and how I solved issues I’ve come across so don’t come wining when you’ve ruined your device, TOUGH LUCK!

I’m a bit of a tech savvy guy but I don’t deserve any credits for the videos and instructions below. The only reason I post this is because there are many complex and risky ways of rooting your Samsung Galaxy Tab so it can become quite confusing in terms of which method to use. All the methods below I’ve executed successfully so this is more or less a testimonial. Also I want to address the Starburst ROM but I come to that later.

So let’s get started, rooting my Samsung Galaxy Tab 10.1 took me about 15 minutes including downloading the software you need. Special credits go out to the guys from Galaxy Tab Hack who basically did all the work and made some great tutorial videos. Cheers guys!

So here are the files and instructions you need:

Oh, btw, you can ONLY  do this from a Windows device, so Mac users see if you can borrow a so hated Windows PC. But then again, Mac users normally will go for the iPad, except me….

So, I did this and then I downloaded the Kindle app from a file sharing site (Kindle is a free app guys so hold your horses) and to my surprise my books were synced immediately after logging in. Apparently the region restrictions don’t apply when you have already installed the Kindle app. And of course I pledge not to buy anymore books for Kindle because that would violate local copyright laws.

During the process of doing this I watched some videos about the Starburst Rom and how combined with a new kernel you can get almost 50% more performance. Because I was at it anyway I decided to download and install the StarBurst ROM and overclock my Galaxy TAB 10.1. I started out with installing the Starburst ROM but I made sure I had a complete backup of my current rooted ROM so I could roll-back in case I wanted to. For backing up your Galaxy TAB 10.1 I would suggest you use ROM Manager, it saved me a lot of time in the end.

Backing up and restoring your Samsung Galaxy TAB 10.1 with ROMManager

WARNING: If you’re a MAC user DON’T DO THIS! After flashing the kernel your Mac won’t be able to connect to you Galaxy Tab 10.1 anymore.

One of the main points of critique on Android Tablets is that their lagging in their response. But from my experience this is definitely not the case with the Samsung Galaxy Tab 10.1, it’s super responsive and enjoyable to use. So my reasons to over-clock my Galaxy Tab 10.1 were more curiosity and so I could brag to the techie guys at Tokobagus. So, I decided to first install the Starburst ROM which should already be faster than the factory default ROM. But before I did that some benchmarking on the default ROM using LinPack Pro so I could later determine if the StarBurst ROM was indeed by itself faster. Well, I got an unexpected result, it seemed slower than the default ROM installed so I was extremely happy I could roll back to my original rooted ROM with all my settings.

Bu still I decided to test the over-clocking but now just using the default ROM. Check again the great instruction video by “Zedomax” from Galaxy Tab . Just follow the instructions and you’ll be ok.

After I installed over-clocking I installed Quadrant on my Galaxy TAB 10.1 and did some performance test. Basically with the app SetCPU you can bring the clock speed down to default which is 1GHz, do a benchmark and then bring it up to 1.4GHz and do another test. Here are the results, though I must say that whatever benchmark app I use there’s a pretty big deviation in the end results. But taking all the averages I would say I got a 35-45% performance improvement which by itself is quite nice but in every day use you hardly notice it. Nice thing though is that the SetCPU has an on-demand setting which spares your battery by only increasing the CPU frequency when needed.

UPDATE: Probably due to having my kernel flashed the Galaxy Tab can’t connect to my Macbook anymore, not with Kies or any other app: FUCK! 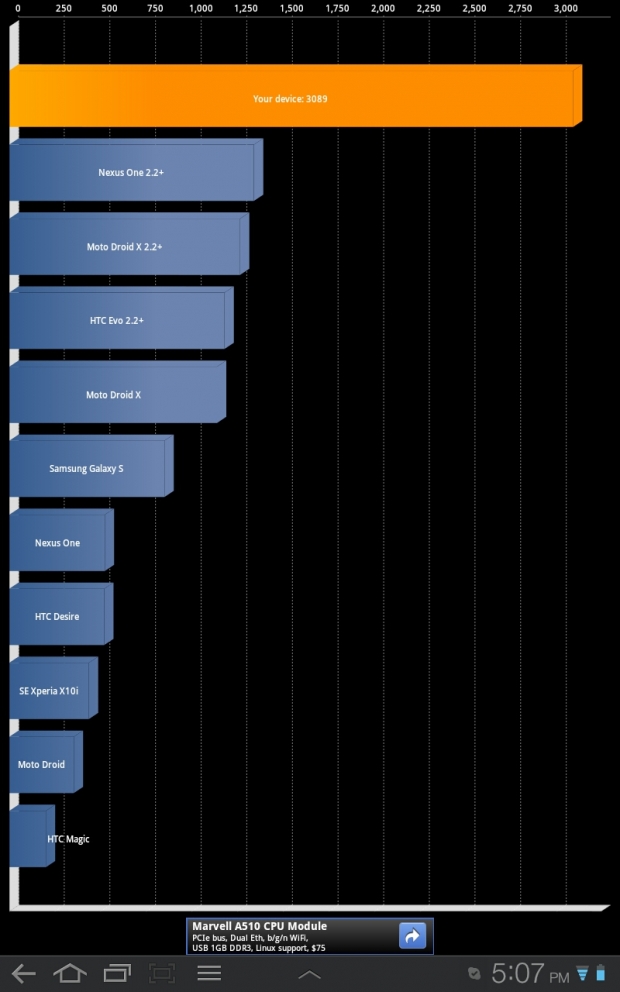 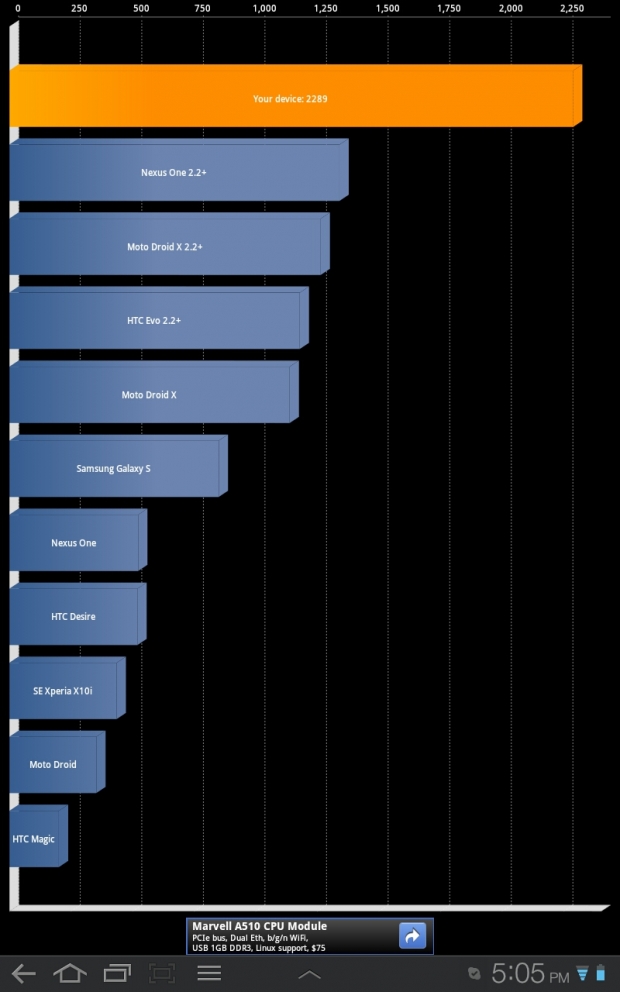