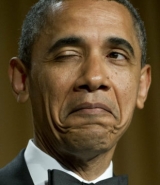 Remember the speech from Obama in 2007 in which he argued to stop spying on people who are not suspected of a crime? Probably you don’t, at least that’s what Obama and all other politicians generally assume when they make promises to get voters. Well, please REFRESH YOUR MEMORY.

An then a few years later Obama addressed questions about the US government disregarding all principles of privacy, how ironic. Basically the outcome was that the NSA is allowed without any warrant to access emails and all other digital information as it seems fit, as long as the targets are not living in the US. Nice! Companies like Google and Facebook providing any kind of info the NSA needs, straight from our email boxes.

Now don’t get me wrong, I’m all for security and that for that sacrifices have to be made. However, we’ve made many sacrifices already, such as airport security. Harassing new moms about their baby milk. Or what about this young girl bound to a wheelchair on her way to get medical treatment? Surely a serious bomb threat. Yep, the kids and the elderly fit the terrorist profile perfectl. Riiiight….. Just like those extremely dangerous women with prosthetic breasts.

Snowden and Assange are hunted down for revealing the US wiping their asses with human rights and privacy laws. In an attempt to divert the attention away from their own criminal acts, the US prefers to label these guys as traitors and terrorists.

So far old news and it’s amazing how quickly we come to except these facts.

“I have been forced to make a difficult decision: to become complicit in crimes against the American people or walk away from nearly ten years of hard work by shutting down Lavabit.”

Plus, Ladar Levison, the owner of Lavabit has to keep his mouth shut. No freedom of speech. Patriot Act, you know. This was almost instantly followed by another encrypted communication provider, Silent Circle, shutting down voluntarily (mirror). Though they didn’t get any subpoenas or warrants yet, they see “the writing on the wall”. In other words, let’s get the hell out before the shit hits our fan as well.

The bastion of what’s called privacy is crumbling down faster than a turd is flushed through the toilet. I have learned in school that in the democratic world governments are elected by the people and work for the people. Unfortunately that’s nothing more than a nice theory. Cell phones, email, chats. Nothing is private anymore. Oh, you don’t mind because “you have nothing to hide”? I wonder what your response would be if security forces invade your house because you did some camping related Google searches.

I’m all for a balance between security and privacy, as Obama says. But from my perspective things are way out of balance.