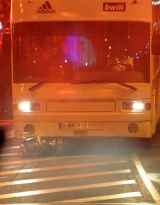 Since 2008 Real Madrid failed to win any trophy but that bad streak ended wednesday at the cost of Barcelona after a tight match won by “Los Merengues” with 1-0. However, during the celebrations afterwards Real’s fans became stunned and in a state of disbelief when Sergio Ramos dropped the cup on the street where it then was run over by the bus. ROFL, LMFAO, EPIC FAIL! VIDEO!!!