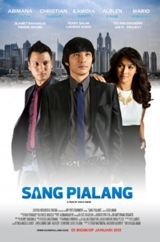 Living in Indonesia for more than 4 years until yesterday I actually never watched an Indonesian produced movie in the cinema. So I was happy to land an invitation for the premiere of the movie “Sang Pialang” (The Broker) in which Christian Sugiono, who invited me (thanks again bro!) plays a lead role. Now seeing a friend in action in a cinema movie is already exciting but the theme of the movie gets me even more excited.

The first sales job I landed was actually in a foreign broker firm. The job started with 6 months, 12 hours per day drilling on sales techniques, on the psychology of selling and basically appealing to greed that’s latent in every human being. I was one of the very few in class to make the cut and worked another year as a “broker” and this was definitely one of the craziest periods in my life. For sure my favorite movie so far on this topic is The Boiler Room which is so similar to my period as a “broker” it’s almost scary. I should actually write a post on this later.

Kevin (Christian Sugiono) is working as a broker for his fathers’ securities firm (Barata Securities) together with his friend Mahesa (Abimana Aryasatya). Together with three other friends also working in the financial industry they form a group of friends that hang out regularly. But at one point Kevin is tired of being less successful than his friend Mahesa (who’s actually graduated as an architect) and reverts to methods which are illegal. Prior to shooting this movie all lead roles did some workshops with actual brokers to really get a sense of how these markets work and to make the movie as realistic as possible on that perspective.

But the movie has more story lines, like the triangle relationship between Kevin and Mahesa with the stunning Analea (Kamidia Radisti), the struggle between money and doing the right thing, getting or not getting the girl with money, dealing with your fathers’ expectations and the generation gap between Mahesa and his father.

Usually when a movie premieres in the western part of the world the whole cast & crew anxiously await the reviews the next day in the newspapers. Movie critics can be pretty vital for the success of a movie. So today I checked all news on “Sang Pialang” and found only neutral articles without any opinion on whether this is a good or bad movie, no criticism at all. Maybe someone can explain me why but this blog owes it to its reputation and to the movie to give a verdict.

Obviously this movie has got to be put in the context of the Indonesian film making industry which is still quite young and where budgets are nowhere comparable with any Hollywood production. Investing in Indonesian productions is quite risky for just the reason that Indonesia is one of the countries with the least movie screens per capita in the world.

So I was pleasantly  surprised to watch a well produced movie with pretty good acting skills. Though the topic of the movie isn’t new the scenario offered different angles about the relations between the characters. Sure there were some production glitches such as a 2 minute scene in which 57 rounds F1 elapsed and another scene where 7 hours later still the same program was on TV. But I guess most won’t even notice these small glitches and they definitely don’t affect the movie.

One of the goals of “Sang Pialang” was to educate Indonesia on the way things work in the stock markets. I guess to a certain level they’ve succeeded but some things could have been more realistic. As far as I know sales and actual trading are not done my the same person but obviously it makes the job more sexy. Also I would have loved to see some more realistic sales calls like in The Boiler Room but maybe that would be to confrontational for a wider audience or it’s a cultural difference though I’m pretty sure the laws of sales are universal.

Overall I think the cast and crew can be proud of this new Indonesian production. The movie is entertaining from the start with good acting and goes beyond the surface of the financial markets. The movie is suitable for all ages and is definitely a breath of fresh air between all the ghost and horror movies that dominate the local movie industry. The movie is fresh, it’s current (the Indonesian stock market is still relatively young and small) and in terms of offering entertainment it can compete with international movies.

I’m pretty sure that you will have something to talk about after having seen this movie so please drop your comments on this movie once you’ve seen it.