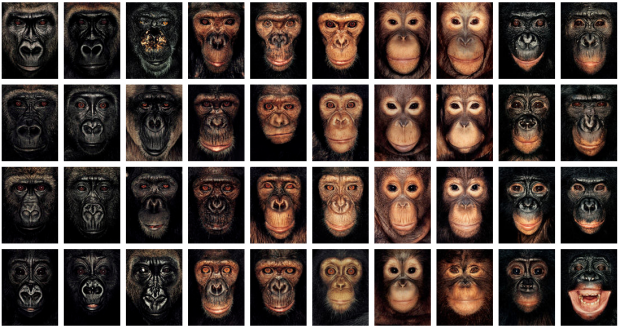 Meet James, one of the “talents” in a James Mollison project called “James & Other Apes“. I’ve never heard of James Mollison nor this project which he published already 8 years ago but I’m so loving this. This is what James (the photographer) says about his project:

While watching a nature program on primates I was struck by their facial similarity to our own. Humans are clearly different to animals, but the great apes inhabit that grey area between man and animal. I thought it would be interesting to try to photograph gorillas, chimpanzees, bonobos and orangutans using the aesthetic of the passport photograph- its ubiquitous style inferring the idea of identity.

I decided against photographing in zoos or using ‘animal actors’ but traveled to Cameroon, Republic of Congo, Democratic Republic of Congo and Indonesia to meet orphans of the bush meat trade and live pet trade.

First of all I love the idea itself. No one made portraits of apes this way before and the result is beautiful, up-close and personal. Somehow photography has a magical attraction on me and I would love to buy an over-the-top full-frame camera with the works. But what would I shoot? I’m pretty much trapped between work and home with an occasional escape to another place and I guess I lack real photography talents and skills.

What I also like about James is that he has this “crazy” idea and just executes it. Sure he will make some money with it but I guess there are better “business models” to consider. Instead James packs his suitcase and flies off to an unknown adventure, not for the money but because he has put his mind on making portraits of apes. Just imagine telling that before you fly off to your wife or parents and imagine their response.

Yes, I have a huge respect for people like James and I have to confess I envy him a bit as well. Don’t get me wrong, I love what I do but it has pretty much pinned down in one location for a longer term. There are people who tend to stick in the same place with the same job for a long time and you have people that take risks and choose for adventure. Though the last option isn’t the safest or easiest one, I guess it could be a really life full filling option. I feel like I’m somewhere in the middle.

Big respect to James and all the other people in the world living their life to the fullest, pursuing their dreams and bring us some great stuff.

The sad side is that apes like Millie are still the victim of bush meat trade and live pet trade for “street entertainment”. Tourists and locals, please don’t endorse this by giving money to people in the streets letting monkeys perform tricks. If there’s no market then the supply will stop as well. I really hope countries like Indonesia will soon wake up and really start protecting the true wealth they have before it’s too late. For me the true wealth of Indonesia is it’s beauty, it’s rain forests and the biggest variety of living creatures in the world.

Via boingboing.net via Accidental Mysteries