Red Square is a Vodka Club concept with 3 locations in Indonesia. Red Square is located in the Arcadia building in the Senayan area of Jakarta. I’ve been their twice, one time on a wednesday night and once on a friday night. Both times with my friend Absolut so forgive me if I left out some details.

Anyway, Red Square Jakarta is fairly moderate in size and considering a large part of the club is taken by tables and comfy couches I guess the maximim capacity of around 400 people. I think interior and size wise Red Square can be compared with NuChina, but the crowd is definitely more mature. I guess the venue aims at upperclass people enjoying both comfort and a party.

Early in the evening Red Square positions itself as a loungy restaurant (menu front - menu back) but it wouldn’t be my first choice to eat, in fact there are some great restaurants in the building. Nope, Red Square Jakarta comes to live later in the evening, or actually more around midnight.

The place is mostly popular amongst foreigners, ayam and women for whatever reason attracted to foreigners. Nice chicken and egg question on who were there first but then again who cares. If you’re a foreigner new to Indonesia and Jakarta you might become slightly confused and maybe very happy with the attention you’ll probably gonna get from the many often attractive women. Up to you what to do with that but I regularly check the mirror and conclude that I’m still no Brad Pitt so it must be something else. If you’re married or in a serious relationship and planning on a night out alone read this post on Jakarta100bars.com first and believe it. After almost 3 years in Indonesia I have quite a large group of female friends and acquaintances and the ones interested in foreigners don’t make a secret of that, even not in front of your girlfriend or fiancee. 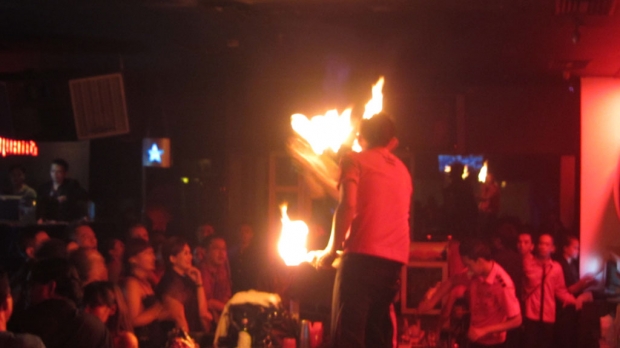 What else is there to tell? Well you pay more than for instance in Triple 9 but I fail to see what more you get for that. The music is obviously depending on who’s spinning but it seems they go with the save house tracks even if those have past their expiration date. That just means that for the music lover it’s less interesting but after a few vodka’s most party lovers couldn’t care less about expiration dates on music.

The staff seems polite and friendly but of course that could be directly related with my spendings and company. All in all Red Square is a great option for a night out in Jakarta. Though my favorite is still Triple 9 I will still occasionally visit Red Square. VIDEO.