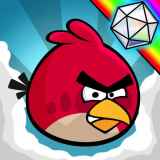 A Google spokesman admitted its AdMob wing targets adverts based on information gleaned from apps (Do no evil?). Apple spokesman Tom Neumayr said: ‘We have created strong privacy protections for our customers, especially regarding location-based data,’ adding that ‘privacy and trust are vitally important’. Chillingo said it does not share any information with outsiders.

Will this stop you from playing Angry Birds? With so much money involved in mobile advertising it can hardly be called shocking news but in the light of Facebooks recent privacy issues it’s somewhat weird that this seems to be a none issue.

So, for all you Angry Birds fans who probably really don’t give a damn, hereby a nice Angry Birds strategy video, more Angry Birds walkthroughs on Youtube. Game on!