According to Reuters an Libyan governement spokesman told that yesterday on April 30th an attack with assumably 3 precision rockets was carried out on the residence of Libyan leader Muammar Gaddafi. The attack killed his son Saif al-Arab Gaddafi and three of his grand children. NATO is denying the attacks on Gaddafi’s house and attempting to kill the Libyan leader but said that it had initiated air-strikes on strategic military targets in the same area of Tripoli.

“NATO continued its precision strikes against regime military installations in Tripoli overnight, including striking a known command and control building in the Bab al-Aziziyah neighborhood shortly after 1800 GMT Saturday evening,” the alliance said in a statement.

END_OF_DOCUMENT_TOKEN_TO_BE_REPLACED 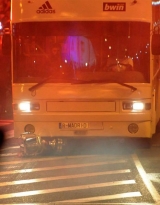 Since 2008 Real Madrid failed to win any trophy but that bad streak ended wednesday at the cost of Barcelona after a tight match won by “Los Merengues” with 1-0. However, during the celebrations afterwards Real’s fans became stunned and in a state of disbelief when Sergio Ramos dropped the cup on the street where it then was run over by the bus. ROFL, LMFAO, EPIC FAIL! VIDEO!!!

Nigeria, a nice sunny country known for it’s passionate Internet culture famous for their “419″ business model. The country with friendly people who just happened to have a deceased banker for an uncle and kindly ask your assistance to help transfer the money out of the country in return for millions of dollars.

Nigeria, your favorite destination when looking for adventure at sea, where Blackbeard, Calico Jack, Anne Bonny and Henry Morgan have reincarnated.

Yep, Nigeria is a happy bunch also known for it’s professional and capable police because nothing and when I say nothing I mean really nothing goes unnoticed for the strong arm of the law. Two robbers trying to steal a car and when they are noticed one decides to change himself into a goat. Nice try but you got to be kidding if you think you can get away with that, for all they care you can change yourself into a cock roach but that still won’t keep you out of prison. Great police work guys Ascari, big up yourself!

Disclaimer: every goat is assumed innocent until proven guilty in a court of law. Any resemblance to the the goat in the thumbnail picture are purely coincidental.

Yeah, we Dutch are fond of winning, thus we hate losing. Well, you might say, that’s normal, everyone likes winning and losing makes no one happy. True but we Dutch really really.. REALLY hate losing and we like to change the odds in our favor anyway possible.

The people that were with Tokobagus when we were still on Bali, especially Anom, will probably vividly remember our paintball outing. Because my business partner Arno isn’t what you call a Rambo kinda guy he decided to change the odds by arranging some protection, extra pressure on our guns and 5 times the amount of bullets… and I must confess, it worked: #winning!

END_OF_DOCUMENT_TOKEN_TO_BE_REPLACED

The unrest and turmoil seems to continue in the Arab world. Saturday France, Great Britain and the United stated  bombed targets in the capitol Tripoli and the cities Misurata and Benghazi. This after information became available that suggested that Libyan leader Muammar Kaddafi the bring down the resistance with whatever means necessary.

During the start of this operation called Odyssey Dawn at least 110 Tomahawkmisiles have been fired by the NATO coalition mostly aimed at antiaircraft artillery of Kaddafi’s army. For military geeks, on the Guardian you can find an interactive map of the no-fly zone and all the info about Odyssey Dawn. END_OF_DOCUMENT_TOKEN_TO_BE_REPLACED

The images of the aftermath of the Japan earthquake and tsunami shocked the world and showed devistation, death, horror and above all lots of grieve and suffering. But disasters like this always have their miracles like the amazing survival of an 80-year old woman and her 16-year old grandson.

The tsunami also took it’s death toll at see but the sailors in this video miraculously managed to survive their encounter with the mind-blowing high and forceful tsunami. MUST SEE VIDEO!

Today Jakarta was hit by a storm causing trees to unroot, a roof at SenCi to collapse, floods all around and lots of more minor damage. But however unfortunate that maybe for some, the pic below shows that nature’s violence can be extremely stunning in a cruel way.

Today the office of the Liberal Islam Network, a moderate Islamic group, received a book which seemed to be addressed to the group’s former director and liberal Muslim scholar Ulil Abshar Abdalla. Because someone detected cables with a strong smell they suspected it might be a bomb and decided to call the police. So far so good. However, the police officer who arrived at the scene clearly tried to dismantle the bomb which ended bad resulting in four people injured including the policeman losing his hand.

I’m not known for being speechless but sometimes things happen that leave me speechless, realizing how tiny we are compared to natures forces and how lucky I am. Sometimes it’s just better to say nothing and let the images tell the story…

My heart & thoughts goes out to the people of Japan, may God be with you.

Please donate money for the relief efforts in Japan of the Red Cross!

Everyday millions of people anguish themselves thinking on how to get rich quick and most of the time they keep thinking for the rest of their life. Some people we call entrepreneurs actually give it a try and mostly spend their life working like crazy without actually making one million dollars.

As usual really simple solutions prove to be the best solutions. Most of you will remember Alex Tew who at age 21 became a millionaire with his “million dollar homepage” by selling pixels on his homepage and becoming part of Internet history. No if you think that was simple, check out Craig Rowin’s ‘business model‘ which basically is just asking millionaires for 1 million dollars. Simple, not a lot of work and so it seems pretty effective. A mystery man named Benjamin claiming to be a millionaire promised to give Craig Rowin the 1 million dollar he asked for. END_OF_DOCUMENT_TOKEN_TO_BE_REPLACED