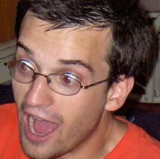 Maybe I’ve watched to many Hollywood movies but I always thought that after serving time in jail brilliant hackers get exciting jobs at the FBI, CIA or some big multinational. After all, it takes a hacker to find/fight a hacker. Well, not so for Dennis “Coolio” Moran, who used our children’s beloved blue friends to blow away Yahoo’s servers with a “Smurf” attack in 2000. Also he gained himself access to the servers of the US Army, US Airforce and defaced the RSA security website and finally the US Army decided is was enough.

So today, on his 28th birthday, I checked up on him again and found out he just lost/quit his job as paper shredder at the Alaska department of Fish and Game Licensing and is currently looking for a new opportunity, preferably in a non-profit environment. Career-wise it could be better to mention his experience at Yahoo and the US Army in his resume. Anyone interested? Would be a great asset to deface the competition. Well, everyone does stupid things when they’re young so I say give this guy a break before he’s forced to hookup with his blue friends again to pick up his old profession. So happy birthday Dennis from SangatPedas and I really wish you all the best.