This second post about SEO for startups is all about the importance of a first paragraph of your content. Now there are many factors in SEO that determine your position in search engines on certain queries but the first paragraph is probably the second most important after the title of your post.

The first paragraph of this post might sound a little bit redundant since the title is already clear on the fact that the first paragraph of a post is important but it immediately illustrates the point of this post. Obviously this SEO post is not only intended for startups but using by using “SEO for startups” I want to improve my #5 Google ranking (mirror) for this search query.

END_OF_DOCUMENT_TOKEN_TO_BE_REPLACED 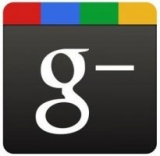 Idul Fitri, a time of family bonds, reunion with old friends, forgiveness and a fresh start.  Idul Fitri, the time of year that Indonesia nearly comes to a complete stop. Everyone packs their bags, jumps on their bike or in the car and heads to their hometown for a yearly reunion with family and friends. Because they pretty much do that at the same time and over the same roads (not much choice) this causes incredible mind blowing traffic jams.

At the same time, people who stay behind in Jakarta get to enjoy Jakarta for one week without the usual traffic jams, without the excessive pollution. Idul Fitri, besides the fact that it stands for reunions, family bonds, friendship and forgiveness, it also stands for excesses in traffic, and not only on the roads.

END_OF_DOCUMENT_TOKEN_TO_BE_REPLACED

The Internet is full of SEO experts who continuously watch the latest changes in search engine algorithms and have mastered the art of SEO. Even though I think it’s somewhat overrated, SEO is still one of your marketing instruments which can help you grow your website so time we spend some time on this topic.

In the series “SEO For Startups” I will focus on what we call “low hanging fruit” because in my experience successful SEO is more about discipline and execution than it is about higher technology. Assuming you have unique quality content on your website simply following the steps in these series will optimize your positions in, and maximize traffic coming from search engines like Google. Btw, my focus will always be on Google for obvious reasons.

END_OF_DOCUMENT_TOKEN_TO_BE_REPLACED

Recently the war between Google and Bing intensified due to Google accusing Bing of copying their search results and as it seems righteously so.

Today it has become clear to me that Microsoft wants to win the war with Google by using any means wether their ethical or not. Looking for some images to use as on this blog I used the Google image search but more than once I ended up unintentionally on Bing image search.

END_OF_DOCUMENT_TOKEN_TO_BE_REPLACED

BUYAKA!!!! it’s me main man Big G in da house!!! Respect! Big up to Google for making me da best human beatbox in da world, check it before you wreck it! Aaaaaai!

Yeah peepz, normally Google is boring, dusty, search, apps advertising and making money. But what the hell? Google turned their Google translate into the coolest digital human beatbox and all of a sudden Google Beatbox is becoming the hottest thing on the net!

END_OF_DOCUMENT_TOKEN_TO_BE_REPLACED 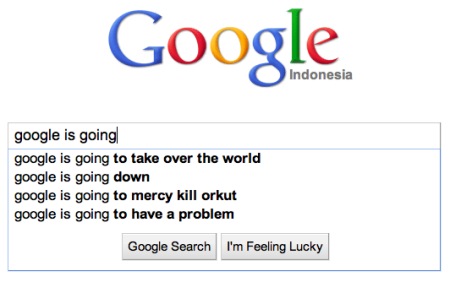 Today I wondered what Google has planned for the near future, so what better than ask Google, right? Well, there you have it. Have a nice weekend y’all!

One of my favorite business quotes is one from Donald Trump “As long as your going to be thinking anyway, think BIG!” Evidently the guys of a bold and brave Indonesian startup going by the name of “Sitti” agree. With their localized contextual advertising system they’re aiming to throw Google Adwords of its thrown, at least in Indonesia.

A (translated) quote from their blog:

We challenge Google inc to compete. We are sorry.
Again, really sorry. I am afraid of Google.
Google has 1 million servers. Sitti has got 6.
Google has 20,621 employees. Sitti has got 20.
Google has 1000 PhD’s who work for them. Sitti has got 1, and even then not really after 6 years of trying.
Google brings Rp 230 trillion in one year. Sitti bring Rp 630.000 from sales of bottled tea in the cooperative Udin, the OB in the office Sitti.
Google has the world. Sitti has Indonesia. And just Indonesia.

Don’t apologize and don’t be afraid guys, you’re heroes in my book. All the great companies started small once facing seemingly undefeatable competition but at least tried and made it. No guts no glory!

Whatever anyone might say, despite having all odds against you we give you guys the big thumbs up! It’s challengers like you guys that make the Internet better. Word! Semangat!

END_OF_DOCUMENT_TOKEN_TO_BE_REPLACED

Time for some serious blogging. Mind you, we’ve got to keep working on our credibility because we don’t want people to think this blog is only a sarcastic parody on what goes on in the digital market. So let’s talk serious, let’s talk KPI’s (Key Performance Indicators), specifically website KPI’s. Cool stuff? I mean KPI’s are AWESOME. Nothing better to impress your colleague entrepreneurs with a comment like “yeah we just hit 450.000 visits per day”, look at those faces, admiration combined with jealousy all around. Of course quickly responded by an alpha-male saying that on his supersite.com the average pageviews per visits had gone up with a staggering 30% to 23 pv/visit. Wow! that’s great, super duper good for you! END_OF_DOCUMENT_TOKEN_TO_BE_REPLACED